Updated 30.3.2022: the text of the post was improved, the content of the recipe card remained the same.

To please the carnivores in the family, I sometimes make a vegan "minced meat soup", which really tastes and looks exactly like the picture. The soup has a very traditional and even meaty taste world. In addition, it contains tomato, which gives the soup color and taste.

Best of all, the soup is ready in half an hour.

Perfect as a companion for soup these wonderful vegan butter rolls.

What to replace minced meat with

Minced meat works best as a substitute Magic Mince - ground soy, which can be found in the frozen section of most K-Supermarkets and Citymarkets. In my opinion, it's such a good product that it's worth buying even for a cold storage.

If necessary, it can be replaced with dark soy meal, but then the mouthfeel is not as authentic.

What to replace pea-corn-pepper with

It cannot be replaced. Minced meat soup would be nothing without pea-corn-pepper ?

Well, no, you can replace it with corn, peas, green beans or some other frozen vegetables if you want. What happens to be found now!

A few words about potatoes

The end result is just as good, but you have to be much more careful with the cooking time of general potatoes. They can easily be cooked too much, especially in a soup like this where the potato is already chopped into small cubes. The cooking time is then really short. If you are not careful, the potato cubes you carefully chopped will fall into small crumbs in the soup.

So during cooking, test with a fork a couple of times to see how well the potatoes are done.

If the potatoes are very dark or crusty, I recommend peeling them. Otherwise, they can be chopped with the skin on.

Note. You can put a little more potatoes than mentioned in the instructions! For us, the potato is the most important ingredient in the soup, because in my children's opinion, nothing is as boring as a soup that is almost just broth.

Vegan "minced meat soup" is ready in about half an hour. 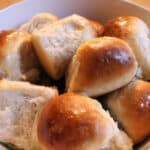 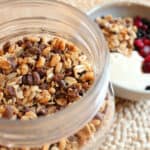