These quick and delicious "meatball baguettes" have become one of our family's favorite dishes. Sometimes the children do these, sometimes I do them myself. For a long time, it was not even revealed to the youngest of the family, a little picky eater, that these were not real meatballs. Now he already knows and doesn't care anymore. The taste is what counts!

The recipe is a variation K-food's meatball baguettes, but as it is, it is already quite far from the original.

You can try different pasta sauces and pestos for the recipe according to your taste. Arrabbiata sauce is our favorite, and the end result is by no means too hot even for children (who don't eat hot food). But a pasta sauce flavored with basil works almost as well. For pesto, I recommend Pirka's paprika-cashew pesto - it's definitely the best and goes well with the Arrabbiata sauce. Other red pestos are also suitable.

We have used either Muu veggie balls or Bolts for this recipe, but other veggie balls are certainly suitable as well. If you're using Arrabbiata sauce, it's not necessarily a good idea to choose chili-seasoned Bolts, unless you deliberately want more kick to your food. However, that combination was a bit too much for the children!

For cheese, I recommend grated Nurishh veggie cheese (e.g. Cheddar & Mozzarella Style), which tastes good and melts surprisingly well into veggie cheese. Another good option is Porlammi veggie cheese because of its good taste. However, it doesn't melt as expected and looks like this after baking:

These delicious veggie round baguettes are ready in about half an hour. 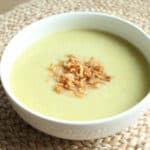 We tested 5 vegan steaks - one was superior!

Ready in a pinch: Easy vegan filling for pita bread